Running it Twice: The Ultimate Guide

Running it twice has been around for years, but until recently, was only common at the highest stakes games in a B&M casino. However, that is changed because now anyone can choose to run it twice online at PokerStars or Full Tilt Poker.

What is Running it Twice?

Simply put, running it twice allows all-in players to see the remaining cards twice instead of once. The pot is then split into two, half for the first set of community cards, and the other half for the second. You can only run it twice at a cash table. It is never done in a tournament. (It’s also possible to run it three, four, five, or as many times as cards left in the deck, but online play is limited only to twice.)

The option to run it twice occurs when everyone in the hand is all in. For example, if there were three players in the hand and only one of them was all in, running it twice would not be possible. Also to run it twice, every player in the hand must agree to run it twice. If one person decides not to run it twice, the remaining community cards left to be dealt will be dealt normally only once. It is much more common for a hand to be ran twice between two players heads up instead of a multi-pot with three or more, although it’s still possible.

If the all ins occurred on the flop, only the turn and river would be dealt twice, not a new flop for the second board since the all in occurred on the flop. The same concept applies to the river. If players were all in on the turn and agreed to run it twice, only the river would be dealt twice. The first river and then another, each river with the four other community cards for half the pot.

An Example of Running it Twice

Let’s say you are in a hand where you are dealt pocket aces and get all-in before the flop against villain who has pocket ladies. After some discussion (or instantly if you’re playing at PokerStars and have it set to always run twice), you both decide to run it twice. It may look like this:

Ouch, so villain ended up hitting a queen and wins that board.

Thankfully we held up on the second board. Because Villain won the first board, and Hero won the second, the pot would be split equally.

Popular Videos of Running it Twice (or more)

Below are some exciting examples of big pots being ran twice (or sometimes four times) from High Stakes Poker and the Aussie Millions cash game:

How to Run it Twice

If you’re playing at a casino, you have to first make sure the table you’re playing at allows running it twice. It’s rare for any stakes below $5 – $10 NL to allow this because it can slow the game down. If it is allowed, after you’re all-in you then have to verbally ask or agree to running the hand twice. The dealer will then confirm and deal accordingly.

If you’re playing online, you can run it twice on PokerStars or Full Tilt. (Both do not accept US players.)

You can run it twice while playing cash games at No Limit Hold’em or Pot Limit Omaha stakes $.25 – $.50 or higher.

How to Enable “Run It Twice” in PokerStars

To enable run it twice, navigate to Options – Run It Twice in the PokerStars lobby. It defaults to Never, so you can change it to:

* Just because you set this to Always doesn’t mean every all-in will be ran twice. It also depends on your opponent. Remember, running it twice is a mutual agreement. 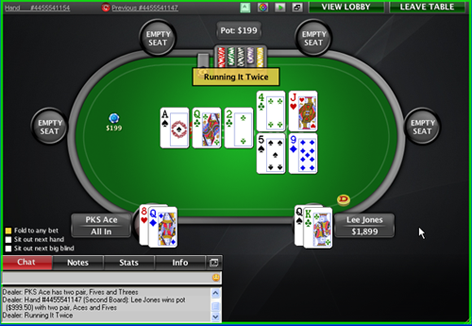 Running it Twice on PokerStars

How to Enable “Run It Twice” on Full Tilt Poker

To enable run it twice on Full Tilt, in the lobby navigate to Options – Table Options – Gameplay Settings… In the window that pops up, check the Run It Twice by Default box. You will now default to running it twice on all tables that allow it. You can also check or un-check the “RUN IT TWICE” checkbox on each open table. 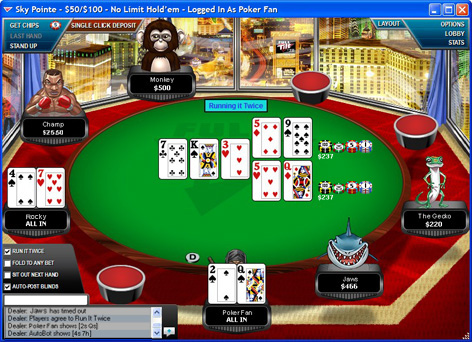 Running it Twice on Full Tilt

Why Run it Twice?

Okay so now you know what it means to run it twice, seen some fun hands where the top pros ran it twice, and know how to do it yourself online at PokerStars and Full Tilt. You’re probably now asking yourself, “Why would I want to run it twice?”

Before we list the reasons, it needs to be stated that running it twice is a 0EV move. This means it doesn’t affect your Expected Value whatsoever. So from a math standpoint, it doesn’t matter if you run it once, twice, three, or fifty times. Running it twice is simply a tool to reduce variance. It reduces variance because it splits the pot in half. Because of this, a $100 pot effectively becomes two $50 pots. So instead of winning or losing $100, it adds another possibility – you could win or lose $100, or win $50 and lose $50 (breaking even minus rake).

So one benefit that becomes clear is you don’t need to be as strict with bankroll management. If you’re playing $200NL, instead of potentially risking $200 on one hand, you split your hand into two $100 stacks. But keep in mind this is only if your opponents decide they also want to run it twice! There is currently no way to tell who will run it twice on any given hand. Even if PlayerA ran it twice 10 hands ago there is nothing stopping them from disabling it for future hands. So ignoring bankroll management on these grounds is risky.

Some other reasons players choose to run it twice is because it’s more exciting. Arguably the most exciting High Stakes Poker hands were when the pros were close and ran it out 3 or 4 times. It adds more drama and delays the final result. It may not be as exciting online, but it still adds an extra thrill, if that’s what you’re into. You might also want to choose to run it twice depending on the players at the table. If you know you’re sitting down with 5 other people who play “crazy” and like to play for stacks, running it twice may relieve some stress.

Some reasons to not run it twice are because it can slow the game down and you end up seeing less total hands. There were some High Stakes Poker hands that ended up taking 10 minutes because of this! Of course this won’t happen playing online, but it still adds time to each hand. You also might not want to run it twice if you know the person you’re playing against is nervous about going all in. He may be more willing to make a call for his stack if he knows you will run it twice. You can use his fear to your advantage.

The Math Behind Running it Twice

There is a misconception that running it twice gives the hand that is behind in equity two chances to improve their hand. This is incorrect. Running it twice helps you realize your equity better than running it once.

Let’s say you have AA and the villain has KK on a board of K 5 A K rainbow and you both go all in on the turn and decide to run it twice.

There are 44 unknown cards, either in the deck or they have been folded. There is only 1 card coming and you have 1 out to win. Assume the pot is worth $1000.

Now to map out what all the numbers mean in the run it twice example.

So as illustrated in the example above, running it twice is 0 EV tool to reduce variance.

So, Should I Run it Twice?

To put it simply, if you want to, sure! Running it twice is a choice every player needs to make for themselves. It comes down to your own personal preference. There are some reasons for and against it, mentioned above, so now you can make an educated decision. Will you run it twice?

Get $600 Free at PokerStars

If you are looking at getting into the action and running it twice versus players from around the world, we highly recommend signing up at PokerStars. They are constantly improving their software, adding fun new features like this and offer top notch support. They also give all new players $600 free for making their first deposit with the bonus code STARS600. So if you don’t already have a PokerStars account, that includes you!

If you would like to try some other poker sites, we recommend 888poker and partypoker. Find the latest partypoker bonus code at http://williampromocodes.co.uk/partypoker-bonus-code-pbc100free/