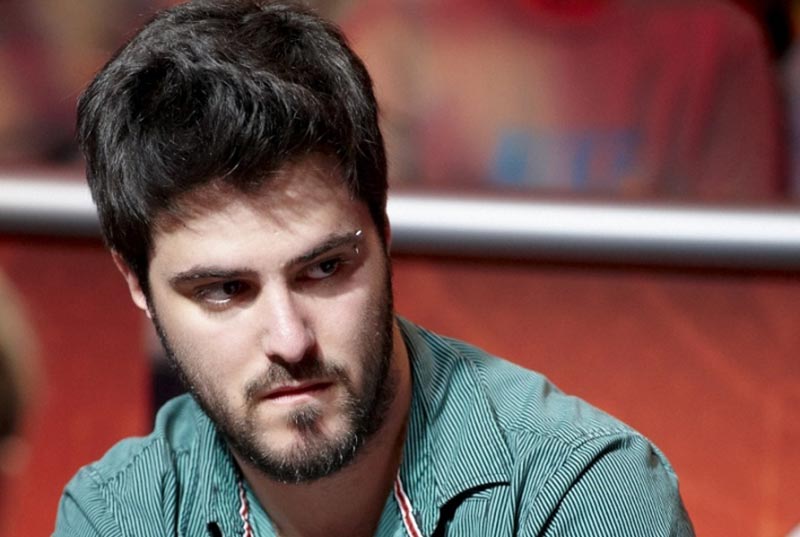 Amazingly, when I was high yesterday from some horrible weed, I came to a breakthrough thought in my poker game. I called sauce up and explained to him what I just realized and he had no idea why it was so amazing. It took me awhile, but then I realized that the reason he didn’t find it amazing is because it was so simple, and the fact that any player would overlook it is ridiculous, but many players do.

Given Heisenberg’s uncertainty principle (lets just say in a HU match since it’s easiest), to an outside observer the holding of each player is based on probability. I.E. Player 1 can have AK, a flush, AQ, player 2 can have 44, 55 etc.

Sound familiar? Yeah it does because all im talking about is that each opponent has a range.

What many players do however is never look at the hand from this perspective. In your eyes there is only one player with a range, when that is in fact far from the case.

All this is 2nd level thinking. We’re thinking of not only what our opponent have, but what we could have and how that will effect the hand.

Now at this point you may say, "Yeah, well I understand this concept, so what?" Well here’s the application.

During any given moment in a hand, each player has a range. From an outside observer’s perspective, he can guess during any point of the hand which player is most likely to win, and a good hand reader would be able to do this 100% of the time. Therefore, the player who is most likely going to win the hand could be said, in other words, to be beating the range of his opponent (this actually isn’t the exact same thing, but the point is is that a given range can be ahead or behind another range).

So let me give an example.

You are against a 17/12 who never raises low pp’s or sc’s preflop. You call his MP raise on the BU. Don’t worry about your cards they don’t matter.

Now, if we do a range of our opponent’s "nut" (by nut i mean hands he will stack off with), we can think of 4 hands that are all only sometimes stacking off, AA/JJ (88 and 99 will likely find a fold somewhere else in the hand as long as we consider 88/99 non blanks). Our opponent, let’s say, raises 10% of his hands from MP. This means that he is only taking 1 or 2% of his hands all the way. 80% of the time he will muck his hand on the flop if we raise, and probably 10% of the time he will end up folding on later streets.

Which brings me to my theorem.

1. It’s so obvious they don’t understand why it needs to be explained.

3. If they told people this everyone would become a much better player and they can’t have everyone be that good.

Earlier in the hand ISF theorem is pretty vague. Preflop it makes sense why we call hands like 45s in position, because we’re behind our opponents’ range and we should be playing more passive when we are. We threebet weak hands from CO raises because our own range is so far ahead of our opponents’.

On the flop it’s a little less vague. We raise preflop and a tagg calls us on the BU.

Flop comes KJ6. Here our range is way ahead of our opponent’s…

If you didn’t understand the first time here’s the explanation again. We will stack off everytime with KK, JJ, 66, KJ. Sometimes with AA/AK/KQ. Our opponent will stack off with 66 and KJ (except he won’t show up with KJ a lot). Because our range is completey crushing our opponent, we should play the hand a lot more aggressively! This is why it can be really awesome to be the PFR!

On the turn since our ranges become a lot tighter, play becomes a lot easier. Hand ranges at this point normally consist of only a handful of hands, making it much easier to play more aggressively if we are ahead of their range, and easy to play more passive if we are behind it.

The turn, and especially the river, are times where some super sick bluffs can take place because of how tight the ranges become. Let’s say the board is KJ658 and a flush just completed on the river. We flat called two streets, which is easy to read as a FD. We actually have a pair of jacks. Our opponent has a huge range, including a flush, which he’ll have maybe 15% of the time. Since we show up with a flush so much more than our opponent, which is the nuts, we can play the hand much more aggressively.

There are of course some flaws in the theorem.

1. Our range is entirely dependent on what our opponent thinks our range is. Therefore a fish is not putting us on much of a range and all we can really do is think on the 1st level. We have a hand that is beating his range then we bet/call. If we don’t, then we fold (call if we are drawing or since we are ahead of some and pot odds dictate).

2. Hands our opponents will stack off with become liquid. I actually will go on record in saying that these adjustments will come very slowly, but likely not at all at 600nl-. But as we become more aggressive or more passive our opponents’ nut hands (which I have defined for the sake of simplicity to be hands they will stack off with) will become wider or smaller. Yet, this doesn’t break the theorem, rather it just makes us think harder about our opponents’ range.

3. Nut hands aren’t all we should be taking into consideration. But "Strength of range" is extremely hard to define. Let’s say we put all hands on two opposing ladders. Each hand beats all hands below it. The higher up, the better the hand. Is it the total "height" of all the hands on your ladder combined that determines the strength (probably not) or is it also effected by outliers and clumps? Or do the variables completely change in different situations? Oversimplifying it, we are playing holdem with no flop, best two cards win period, with one betting round. There are antes.

We are only dealt KK or QQ and we know our opponent is only dealt AA or 72o. The player with AA seems to have a huge advantage.

If we are first to act we can never value bet because we allow him to play his hand perfectly. He will never call and only raise or fold. He will always raise AA, and maybe even sometimes 72o. As to what frequency, we can only guess. Even if we check he is again left with the upper hand because he alone will know the frequency he will bluff.

If we are second to act we will never raise his bets, but rather be forced to call sometimes, most likely an inaccurate amount.

The guy with AA or 72o knows whether he is ahead or behind at all times, and therefore his decisons are much much easier. I don’t see why this would be any different with a flop turn and river, but I’m not positive.

Okay, that’s it for now. Feel free to shoot me down.